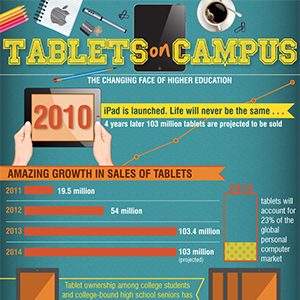 How Tablets are Changing the Face of Education

Tablets on Campus: The Changing Face of Higher Education

2010: iPad is launched by Steve Jobs. Life will never be the same.
4 years later: a projected 103 million tablets (iPads and others) are projected to be sold

90: percentage of all tablet owning college students that say tablets are valuable for educational purposes

35: percentage of college students owning both a tablet and an e-book reader.

46: percentage of tablet owners who say that they intend to buy another tablet within the next 6 months

63%: Of College students believe tablets will replace textbooks within the next 5 years.

83: percentage of students think tablets encourage them to buy digital textbooks instead of print textbooks.

The Brazilian government bought 500,000 tablets for local teachers.
94: percentage of the educational market for tablets held by Apple…says Apple

What’s so cool about an iPad

• Driving Games and Super Monkey Ball are awesome on it!
• It’s the world’s best digital frame
• it’s nice to touch
• it’s nice to play with.
• The iPad Air is lighter and faster than the iPad 2, with a better screen to boot.

Why students Use tablets.