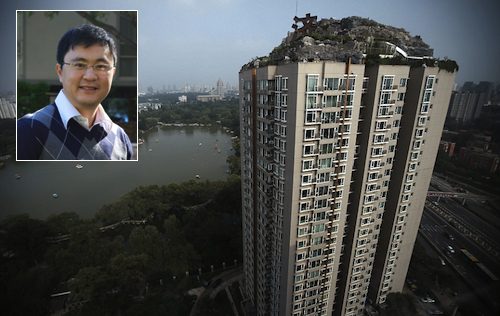 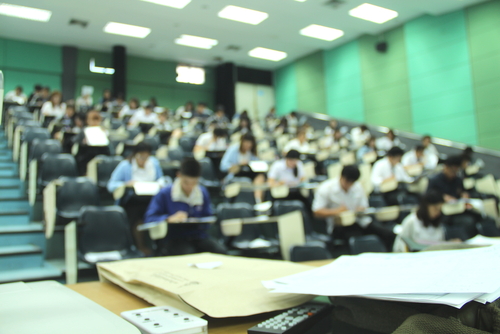 Just like the classes they teach, college professors come in many different varieties. There are the sober, stern individuals who take their subjects exceedingly seriously and insist that you do too – and we don’t envy you if you’re caught talking in their lectures. There are also the self-styled “hip” professors who see themselves as being as much friends as teachers and who aren’t afraid of dropping TV references and slang into their presentations, with sometimes embarrassing results. Some, however, are in a league of their own when it comes to standing out from the crowd, whether it’s through their weird research, odd stunts or wacky inventions. And we think they’re pretty awesome. Read on for ten cool professors who’ve done zany things.

Before the University of California San Diego’s Joseph Wang unveiled his unusual creation in 2010, possibly the only sticky situation that your underwear could have saved you from would have been unfortunate wardrobe malfunctions on gusty days. Now, however, they could potentially save your life. The nano-engineering professor has come up with a pair of underpants that are smarter than most, thanks to an intelligent biosensor found on their waistband. This sensor, commissioned by the military, can measure a person’s vitals, including heart rate, blood pressure and glucose levels, and uses this to identify whether the individual concerned needs urgent medical treatment. Eventually, Wang and his colleagues at UC San Diego and New York’s Clarkson University hope to be able to engineer a way of delivering pain-relieving drugs through the briefs. Perhaps, as a result, the U.S. Army will never go “commando” again.

Richard Wiseman hasn’t always been a scholar – in fact, before embarking upon academic life and ultimately becoming a psychology professor at the U.K.’s University of Hertfordshire, he was a professional magician and one of the U.K. Magic Circle’s youngest inductees. A background in entertaining the masses could perhaps have come in handy, then, when Wiseman started on his quest to make people chuckle through LaughLab. The project, carried out from 2001 to 2002, attempted to discover the funniest joke in the world, as measured through the 1.5 million ratings of more than 40,000 jokes submitted to Wiseman from participants worldwide. There was in fact a serious scientific endeavor behind the amusing research, however, as it tracked how individuals’ place of origin can affect their sense of humor. Wiseman has stated in his final report on the project, “Humor is vital to communication and the more we understand about how people’s culture and background affect their sense of humor, the more we will be able to communicate effectively.”

One man became the savior of dieting chocoholics everywhere when he came up with his unusual Le Whif product. David Edwards, a biomedical engineering professor from Harvard University, unveiled his unique tubes of inhalable chocolate in 2009. The inventive devices provide a way to get a hit of your favorite food minus the unhelpful extra calories. Their initial testing period saw them become a success, with more than 60,000 units sold in just nine months. A coffee variety was made available, too. Edwards himself has suggested that Le Whif or its counterparts could even replace traditional methods of eating, saying, “The idea here is to move beyond the fork and the knife and think about inhaling food.” We’re looking forward to Professor Edwards’ inhalable take on a pizza or barbecued ribs.

It’s a conundrum that has irritated most tea drinkers at some point. Why can’t a teapot’s contents flow perfectly into a mug rather than trickling down the spout, perhaps collecting in a puddle on our finest china or even staining our clothes an unsightly brown as a result? Fortunately for lovers of the beverage, Belgian math professor Jean-Marc Vanden-Broeck, who works at the U.K.’s University College London, was gripped by this question and set out to find an answer. Vanden-Broeck’s somewhat eccentric findings have revealed that “it is a bit like Russian roulette every time you have a cup of tea,” and his calculations show that many variables – such as the water’s heat and the angle of the pour – factor into whether your pot will dribble or flow neatly. Thanks to the efforts of one cool professor, maybe we can now work out exactly what to do for that perfect cup.

We’ve often thought that it would be useful to have eyes in the back of our head, if only to see whether people are making faces behind our back. If something similar happened to New York University professor Wafaa Bilal, though, he could catch the perpetrator red-handed – and with photographic evidence. This is because, in 2010, Bilal took the somewhat risky and utterly bizarre step of having a digital camera embedded in his head, in order to take one shot each minute for art project The 3rd I. Why not just take a camera around with him? Bilal has explained, “I didn’t feel that strapping something around my neck would be the same way I’m committed to the project as mounting it to the top of my head.” Due to health issues, though, the camera eventually had to be removed and secured to Bilal’s neck instead.

Russian-born physicist Sir Andre Geim’s illustrious career was crowned with a Physics Nobel Prize in 2010 for his experiments surrounding the material graphene with research partner Konstantin Novoselov. Just a decade before that, though, the professor – who currently works at the University of Manchester in the U.K. – took home an altogether less serious award in the shape of the Ig Nobel Prize, which celebrates some of the most unique and amusing scientific achievements. Together with Bristol University’s Sir Michael Berry, Geim used what has been described as his “slightly bonkers approach to science” to demonstrate the phenomenon of magnetic levitation with a live frog. This proved that objects other than superconductors can be pushed up into the air employing only magnets and the repelling force of the atoms of which the object is made. Apparently, the amphibian floated “as if it were in a spacecraft,” which is an entertainingly bizarre mental image all by itself.

Huston Tillotson University’s Jeff Wilson has been described as a “zany” professor, and when you look into his new scheme, you’ll probably find it hard to disagree. Wilson, who teaches environmental science at the Austin, Texas-based college, is taking an unusual approach to research by spending one whole year living in a dumpster. That’s right – from fall 2013 he will be leaving behind the creature comforts of the average American home in an effort to show how others can live sustainably without using excess water and electricity or producing a lot of waste. Initially, Wilson will incorporate mod-con elements like air conditioning, a latrine and lights, but he will soon remove these to explore more eco-friendly alternatives, which he hopes will serve as inspiration for the college. Wilson, who now dubs himself “Professor Dumpster,” says he aims to prove that “through less consumption, in this case less than one percent of the average American home, you still can have a happy and fulfilling life.”

Professor Kevin Warwick’s long-running Project Cyborg experiment has opened up some crazy possibilities in cybernetics that could one day see the perfect meshing of man and machine. In 1998, Warwick, who teaches at the U.K.’s University of Reading, took it upon himself to turn into a cyborg. This oddball scheme began with Warwick having an RFID transmitter inserted under his skin, which enabled him to switch on a light by merely clicking his fingers. The totally cool – but undeniably weird – endeavor did produce some pioneering results, though, as it then progressed to Warwick housing an array of internal electrodes within his arm through which he was able to connect his nervous system to the internet. When his wife received a similar device, it even resulted in the first electronic communication performed neurologically between two people.

Having your own home on top of a mountain might seem cool, if somewhat perilous, but what are the options if you also want to dwell in one of the world’s most populous cities? One eccentric professor came up with a solution: build your ideal abode on the top of a 26-story skyscraper. Zhang Lin’s quest for the (very) high life has seen him spend six years creating a penthouse that almost looks as though it’s hewn out of a mountain. It is built out of huge quantities of rocks and rubble, while the greenery of its “garden” adds to its overall natural appearance. Of course, though, there’s nothing natural about its presence at the very top of an apartment block, and the somewhat nutty professor’s scheme has been criticized by his neighbors for flooding their homes and creating extra noise and bother. Still, we have to admit, as zany schemes go, it’s certainly one of the boldest.

Years before San Francisco came together for the Summer of Love, those incarcerated in Massachusetts’ Concord State Prison were turning on, tuning in and dropping out courtesy of a professor who was once named “the most dangerous man in America” and who became renowned for his unusual research. From 1959 Dr. Timothy Leary worked at the clinical psychology department at Harvard, and he had his mind expanded by taking psilocybin mushrooms in 1960. These hallucinogens were at the heart of his controversial experiment with inmates at Massachusetts’ Concord State Prison. Between 1961 and 1963, Leary and his researchers conducted research into whether the effects of psilocybin would lower recidivism levels among the prison population. Astonishingly, it seemed to work, as only a quarter of the inmates would go on to re-offend, compared to the projected 64 percent before the experiment took place – although, that said, the study’s results have since been challenged.